MY AFFAIR WITH JADA SMITH WAS NEVER AN ENTANGLEMENT- AUGUST ALSINA

August Alsina has broken his silence on Jada Pinkett Smith’s “entanglement” confession by insisting their affair was actually an “entangleship”.

The singer, 27, went public with his involvement with Will Smith’s wife in a radio interview earlier this month – claiming he had an affair with Jada with her husband’s “blessing”.

He wrote: “Entangleship – a combination of both”. 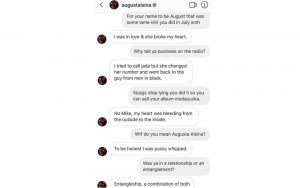